Both aluminium plate 6061 t6 and aluminium alloy 6061 t5 are of the same alloy: 6061. T5 and T6 refer to annealing states of plates. The main alloying elements in 6061 alloy are magnesium and silicon, which have excellent processing properties, good corrosion resistance, high toughness, no deformation after processing, easy coloring film and excellent oxidation effect. 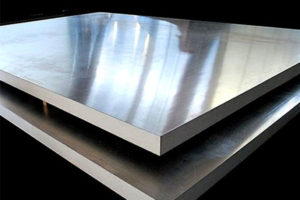 In T5 state an aluminum plate is cooled by a high temperature molding process and then subjected to an artificial aging state, while in T6 it going through an artificial aging after the solid solution heat treatment. At present, T5 (fake T6) is commonly used in China instead of T6. The tensile strength and yield strength are the same as those of T6. The difference is that the hardness is not as high as T6, and the hardness of T6 is HB95, which is mainly caused by the heat treatment cooling speed is not fast enough.

Owing to the fact that the hardness of aluminium plate 6061 t6 is higher than that of aluminium alloy 6061 t5, the 6061 aluminium alloy price in t6 is higher than t5. But now T6 is adopted more than T5. When you really want to choose T5, its process is rare, so you may end up buying 6061 t5 at a higher price. T5 is generally air-cooled in the quenching, and T6 is generally water-cooled. Both have the same modulus of elasticity. In general, the T5 state is used. If the deflection of the rod is passed and the tensile strength is slightly worse, the T6 state can be used. The heat treatment state of the two materials is different. T5 is air-cooled and T6 is water-cooled. T6 has high mechanical properties. Not too thick materials, like 6061 aluminium plate 3mm, air-cooled T5 can achieve the effect of water-cooled T6, some suppliers do this without telling their clients about it.